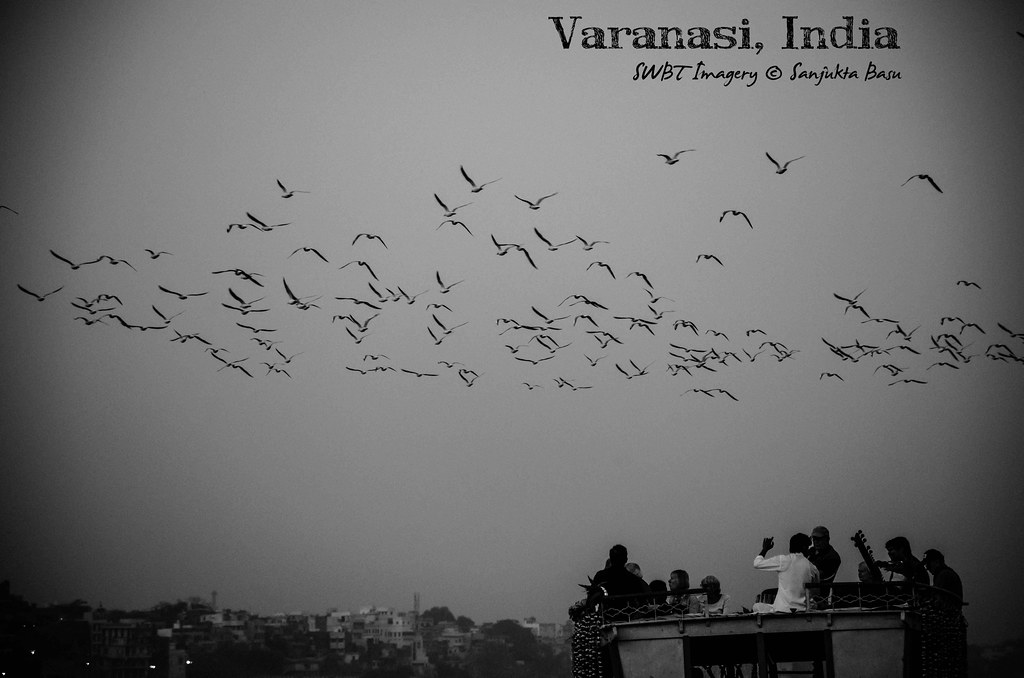 “Varanasi is older than history, older than tradition, older even than legend, and looks twice as old as all of them put together” – Mark Twain

In every nook and corner of Varanasi I found an old dilapidated abandoned house. Some of them palatial buildings, some old humble abodes but they are all gathering dust, cobwebs are gulping them, after sunset they appear dark and haunted. In a world where real estate is the only thing whose prices never fall, and everybody is trying to grab a piece of land, how come these houses are just lying vacant? I found it so surprising and fascinating. I ran a Google search expecting to find some media report, or at least a research paper or some history blogs on these houses explaining why they lie unclaimed and abandoned but found none. Search for ‘Abandoned houses in Varanasi’ led to articles related to the plight of Varanasi’s widows and a search for ‘old houses in Varanasi’ led to zillions of property-buying-selling-renting websites. 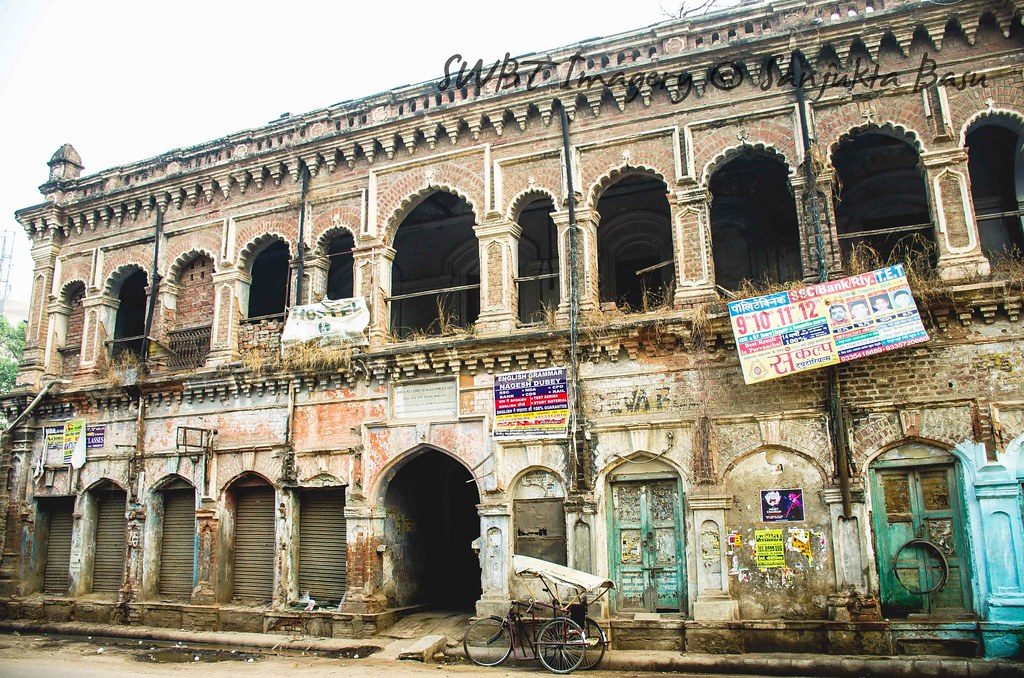 As I walked through the narrow lanes of Varanasi, it seemed to me each abandoned house has its own story, waiting to be told and made into a period drama film. Perhaps there are stories of love, loss, death, abandonment, illicit affairs, sinful desires, jealous husbands, desolate wives, illegitimate children, legal heir, bitter rivals – you know the stuff novels and films are made of and in the end nothing was left but the house which now stands as the mute witness.

I am so fascinated that I can go back to Varanasi again just to do a photo series on these houses. Something like spend about a month there and walk through the narrow lanes and by-lanes of the city to discover them, perhaps ask the locals about the owner of the house, and find out that story waiting to be told. 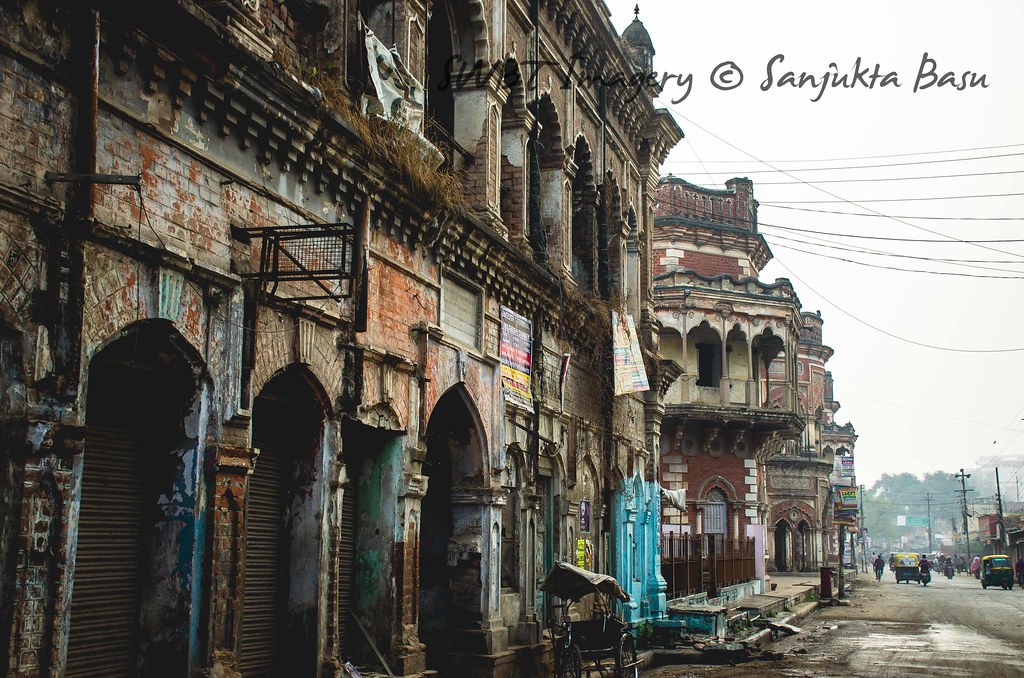 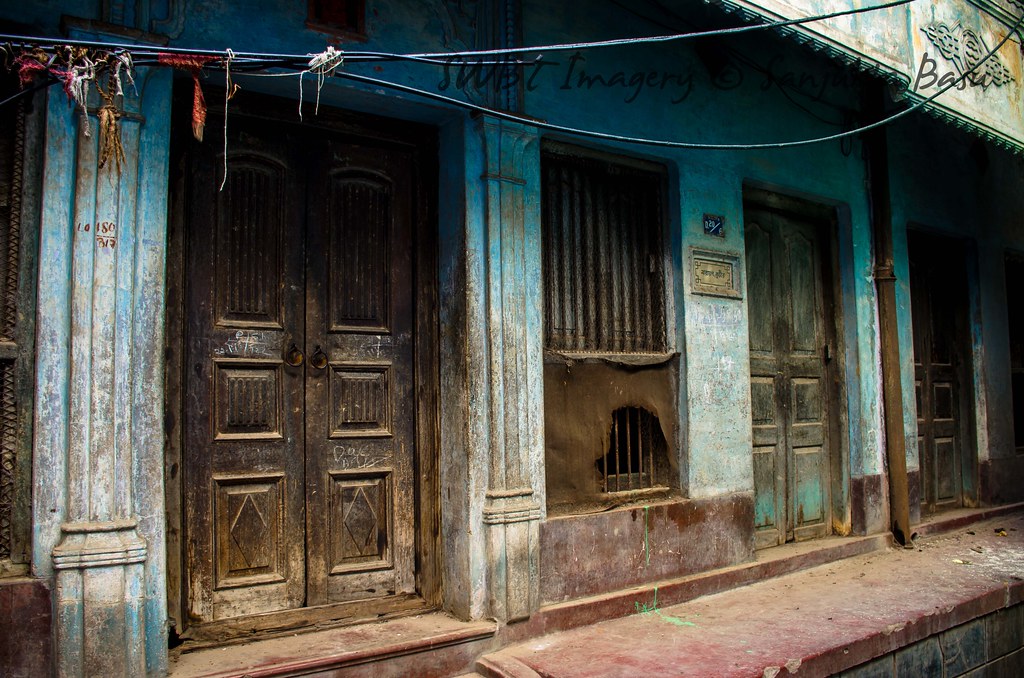 This is the thing about Varanasi. I have heard many of my traveller and photographer friends tell me Varanasi is beautiful, Varanasi is Charming. I would say Varanasi is absolutely stunning. Stunning because in my impromptu one night two days of solo travel it opened up my mind, eyes in such unique ways and filled me in with so many thoughts, ideas, food for writing, photography that I can come back again and again, each time to explore one of the many facets of Varanasi.

I had only known Varanasi through films like Satyajit Ray’s Joy Baba Felunath or Rituparno Ghosh’s Chokher Bali. I imagined it to be a city of the poor and destitute, those who came here to count their last days, I expected to see the miseries of human life on the Ghats of Banaras with a dash of hope for life, as they say it is also the city of myriad emotions, the plight of the abandoned widows are much written about so I expected to meet one of them on the Ghats. 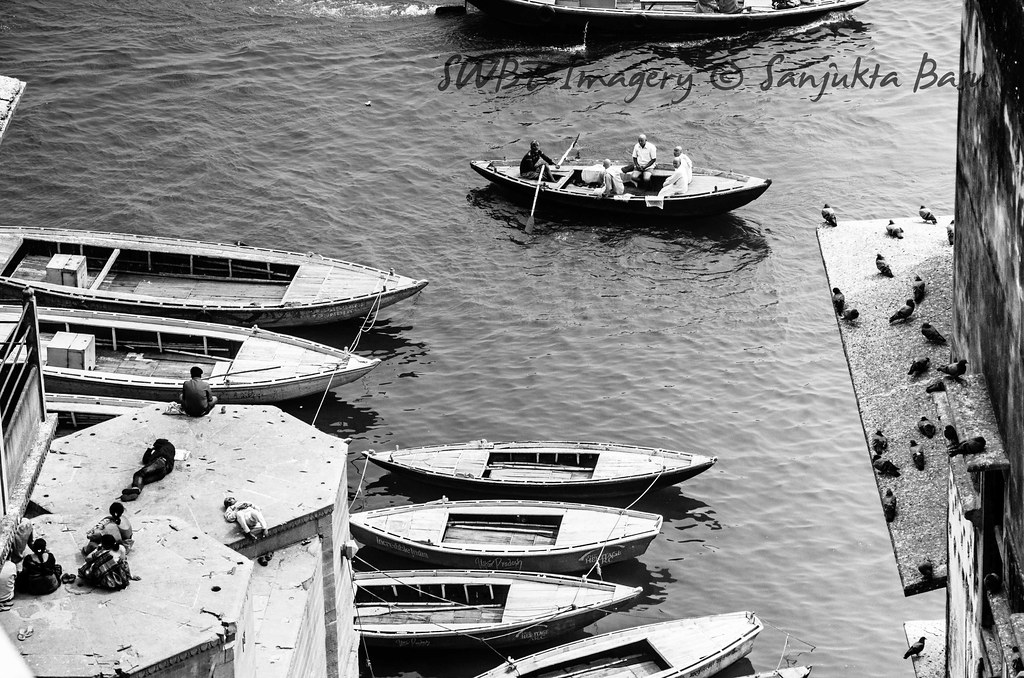 But I didn’t find this Banaras. The Ghats were clean to begin with and that is a big deal. Every Holy place in this country is filthy. Modi’s Swachh Bharat Abhiyan seemed to have at least worked at the Ghats, though certainly not in rest of the city. I found the city of Banaras bustling with modernity, every road of Banaras is dotted with thousands of shops and commercial establishments, clothes, garments, fashion stores (peculiar thing, each fashion store has way too many mannequins about 10-15 of them), mobile stores, eating joints, hard ware shops, building materials, tutorial homes, and so on.

The Ghats of Varanasi

On the Ghats you’d see a lot of happy tourists talking and laughing out loud, taking a dip in Holy Ganga, kids playing around, couple in their wedding attire doing puja, newly married couple on their honey moon, college students taking a day out, families, groups of friends, groups of pilgrims, solo travellers, foreigners, Indian Muslims (Yes I had to mention that because it’s relevant at these troubled times of intolerance that India is going through). 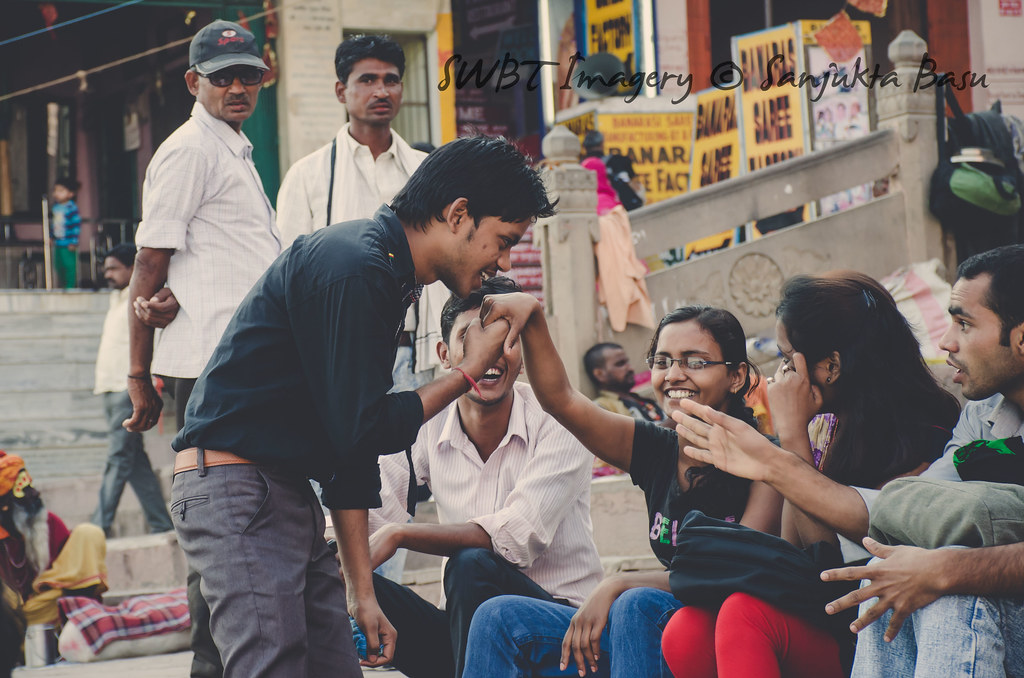 Ghats of Banaras was full of human of all kinds and most of them were hearty and healthy. Of course there were the usual Holy men, covered in ashes, huge jatas in their head, they strategically present themselves in front of foreign tourists, put up their exotic religious face and pose for the camera, and get angry if you don’t give them money. 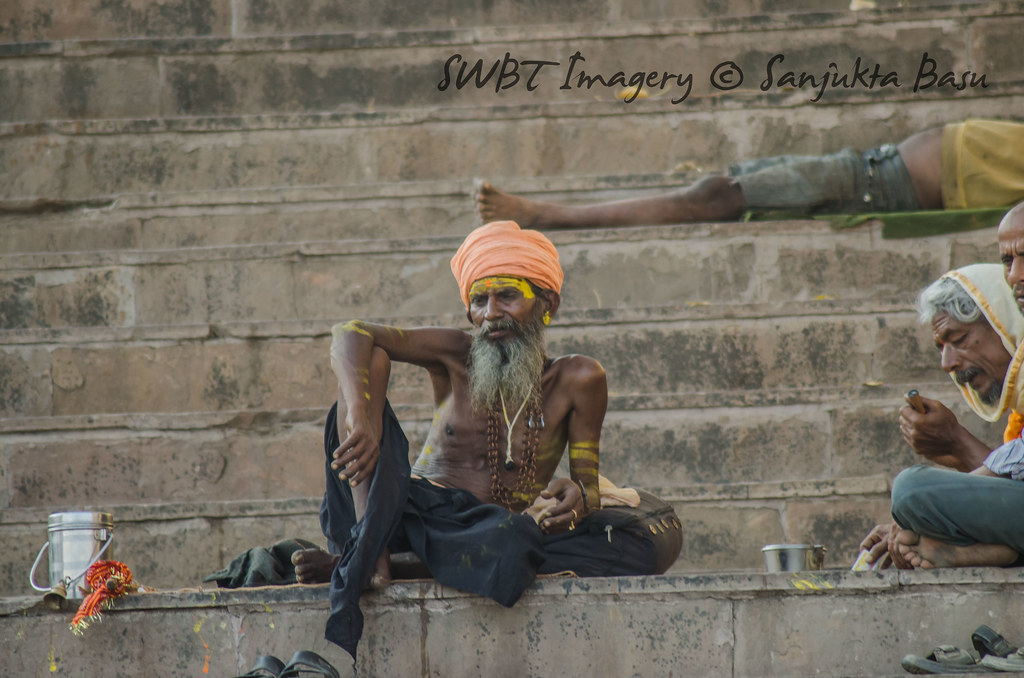 There were the beggars sitting in a row in a designated area; women and children selling flowers, men and women selling food items like papadum, bhel puri, gol gappe; young boat men constantly nagging you for boat ride from one Ghat to another; budding Holy men in their teenage carrying around snakes asking you to take photos and give money, or just give money, and get angry if you don’t; naked sadhu doing a damru dance, traditional barbers doing mundans (head shave) for ritualistic purpose, or simply giving you haircut or shave at a darn cheap rate; men offering massage to white skinned tourists, and if you are really lucky you might meet a young boat men offering you weed sheepishly, like I met one (Interesting story that is, would share later). 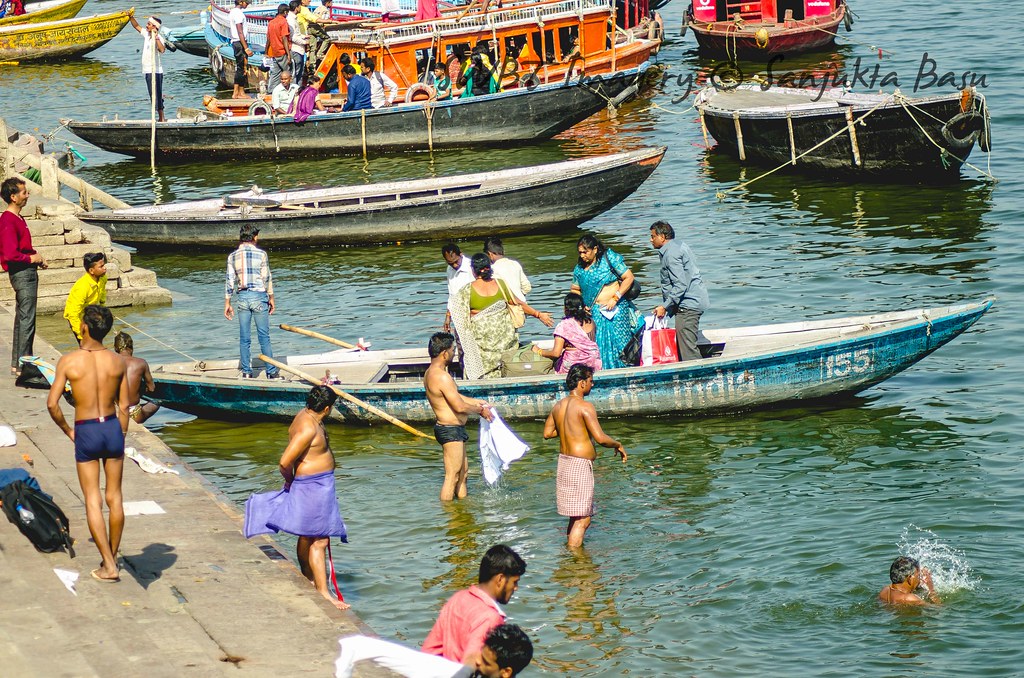 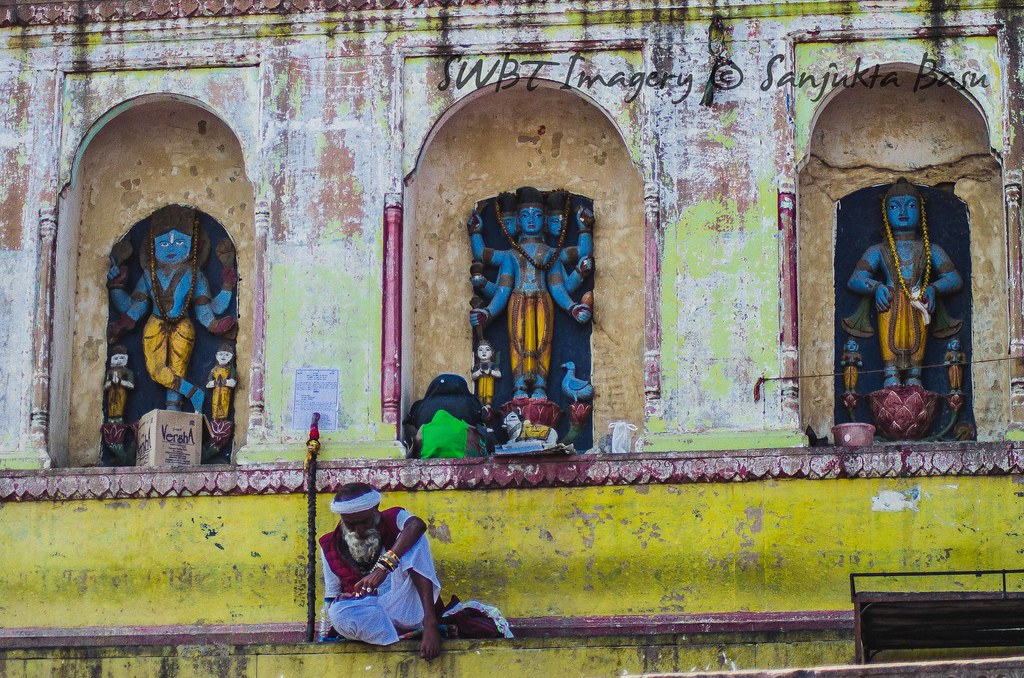 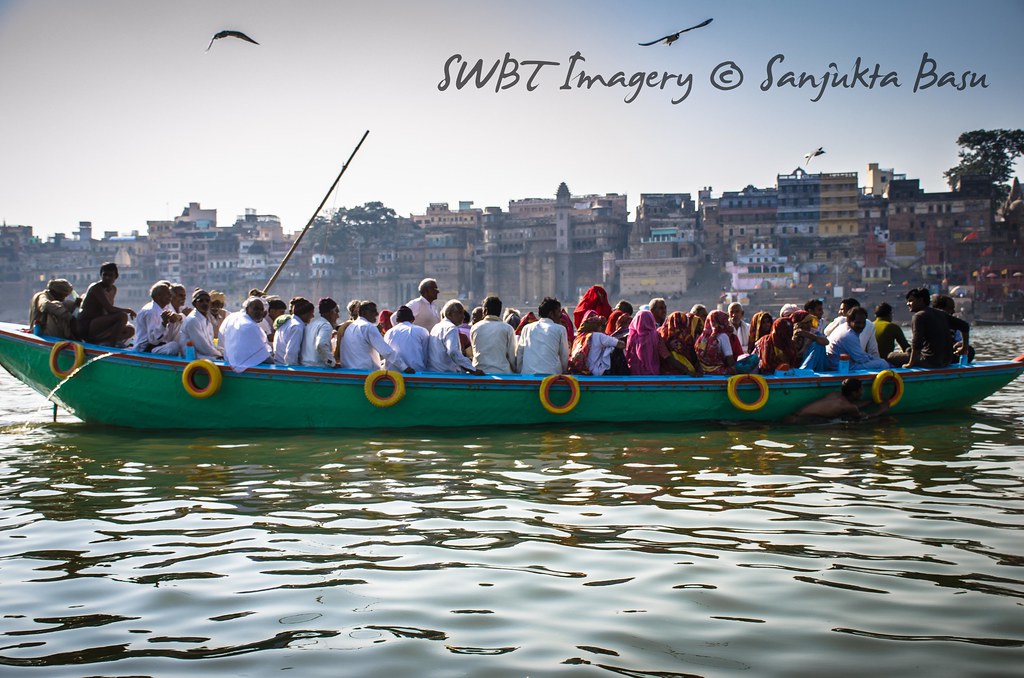 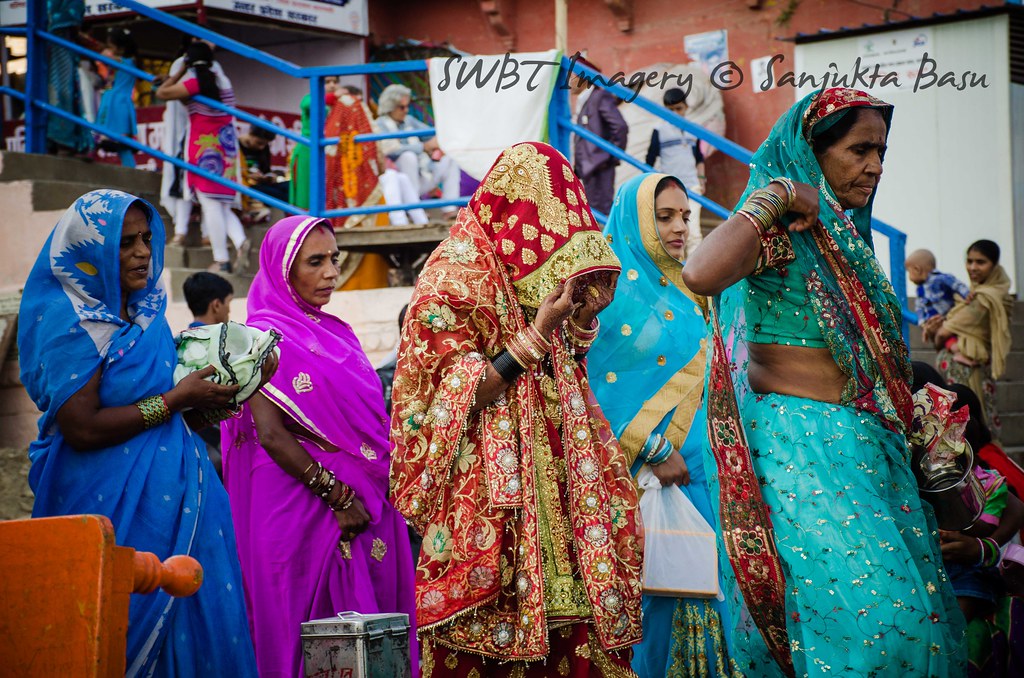 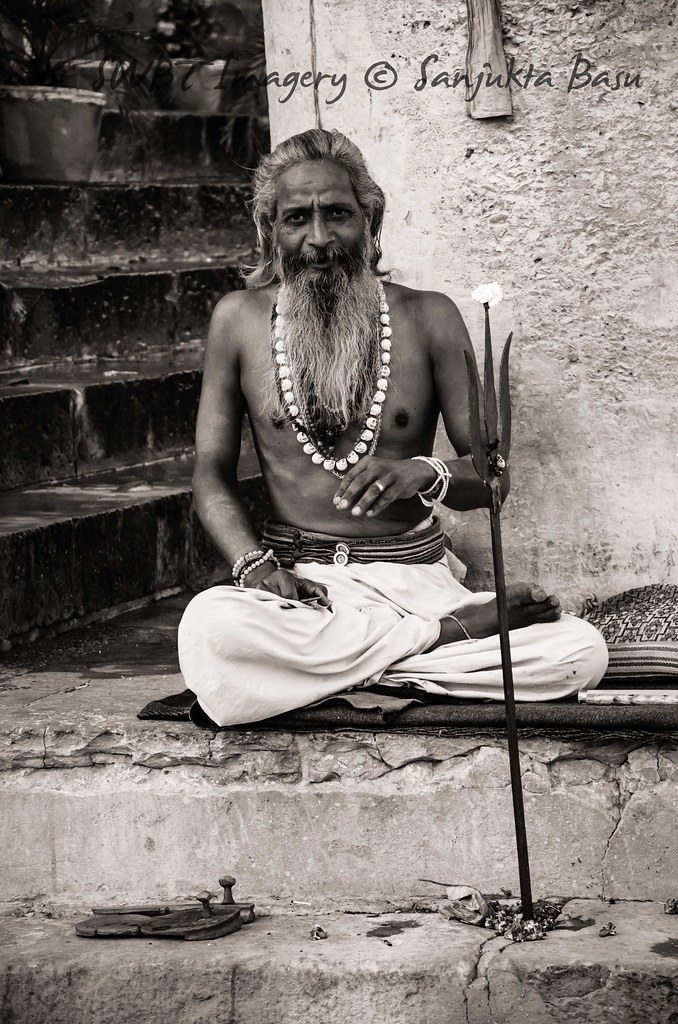 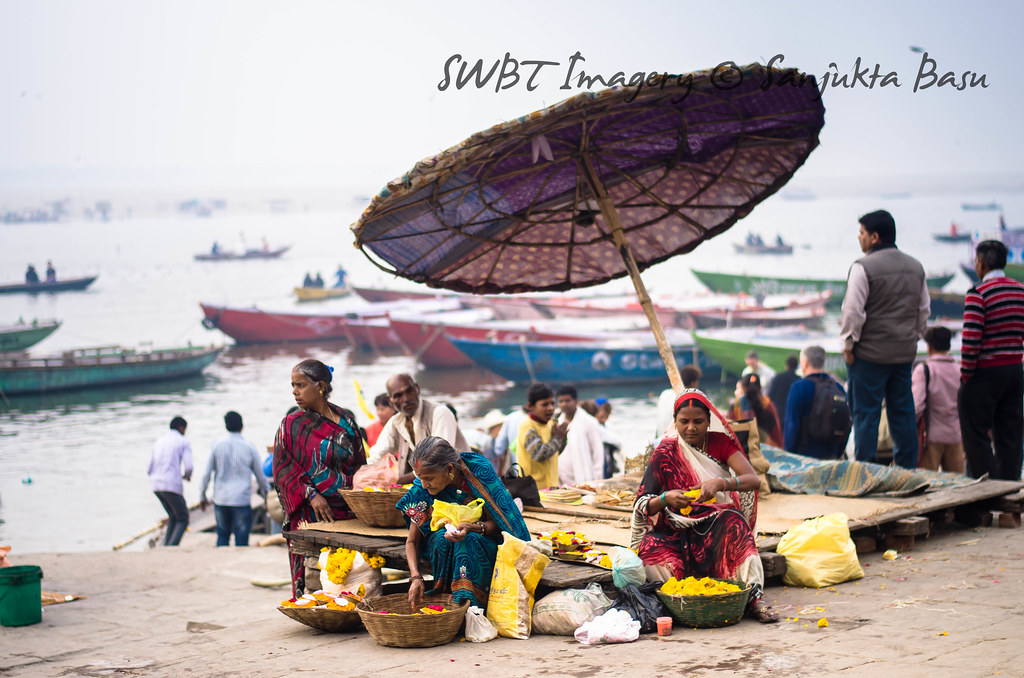 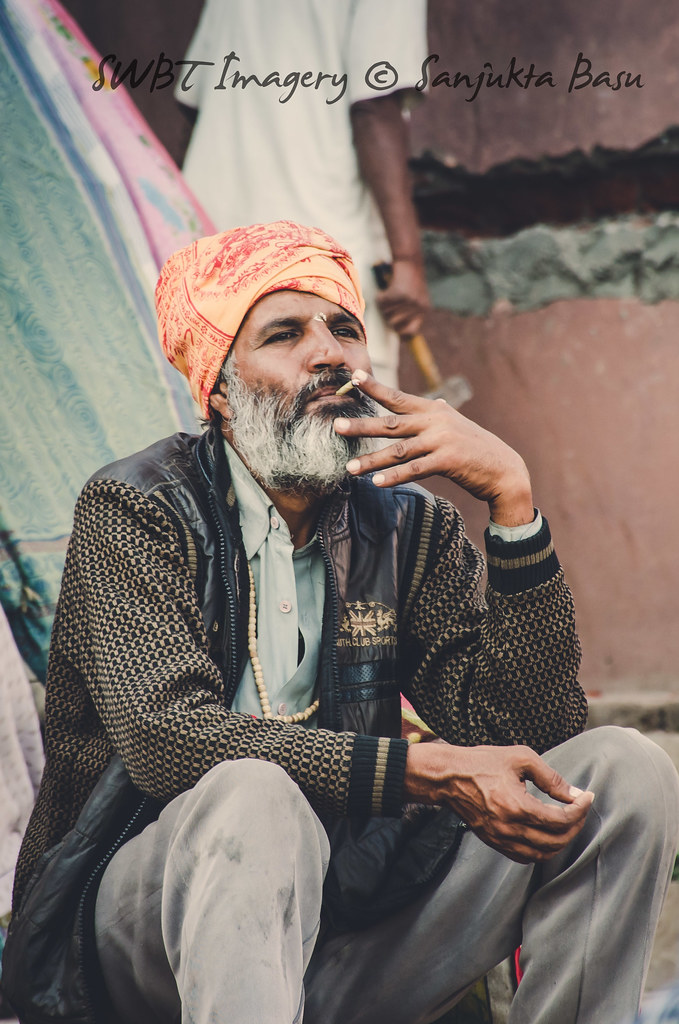 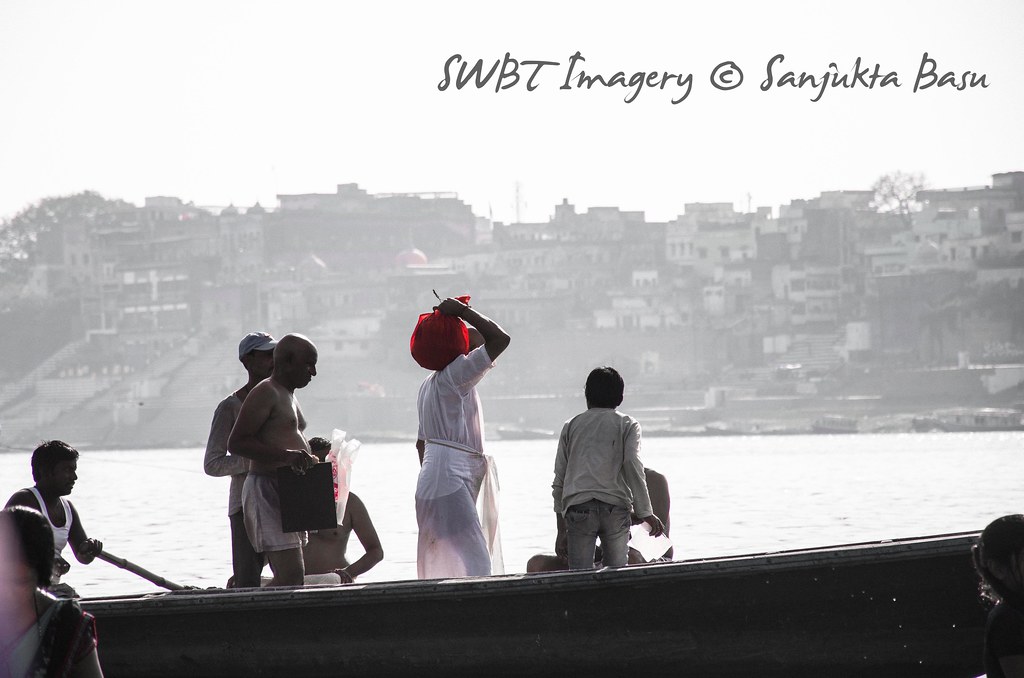 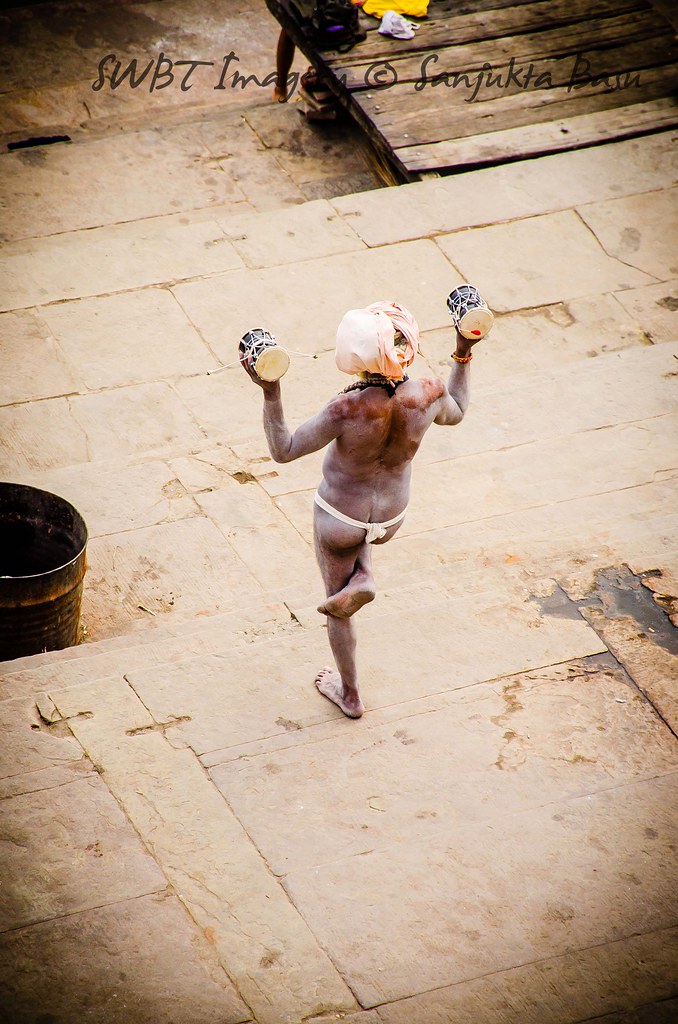 A walk from Ghat to Ghat

Having reached Varanasi by 1.30 in the afternoon I headed straight to the Ghats and spent the rest of the day watching these fun people and activities, walking from Ghat to Ghat, taking photos, sitting down when I got tired or to simply breathe as much of the cool breeze of the Ganges as I could. Towards the evening I hired a boat to take a ride from Harishchandra Ghat on one side to Manikarna Ghat on the other covering around 40 Ghats in between. I had to break my SWBT rule of not hiring a whole taxi for yourself and always use shared transportation when I hired a full boat to myself, because I didn’t want to waste time looking for people to share. The ride from one end to another took about 45 minutes in which my boatman told me about the history of each Ghat. We then anchored in front of Dasaswamedh Ghat to see the Ganga Arti from the front. There were about hundred more boats also anchored for the same reason. Some very large double decker boats with more than 50 people in it, some smaller ones. 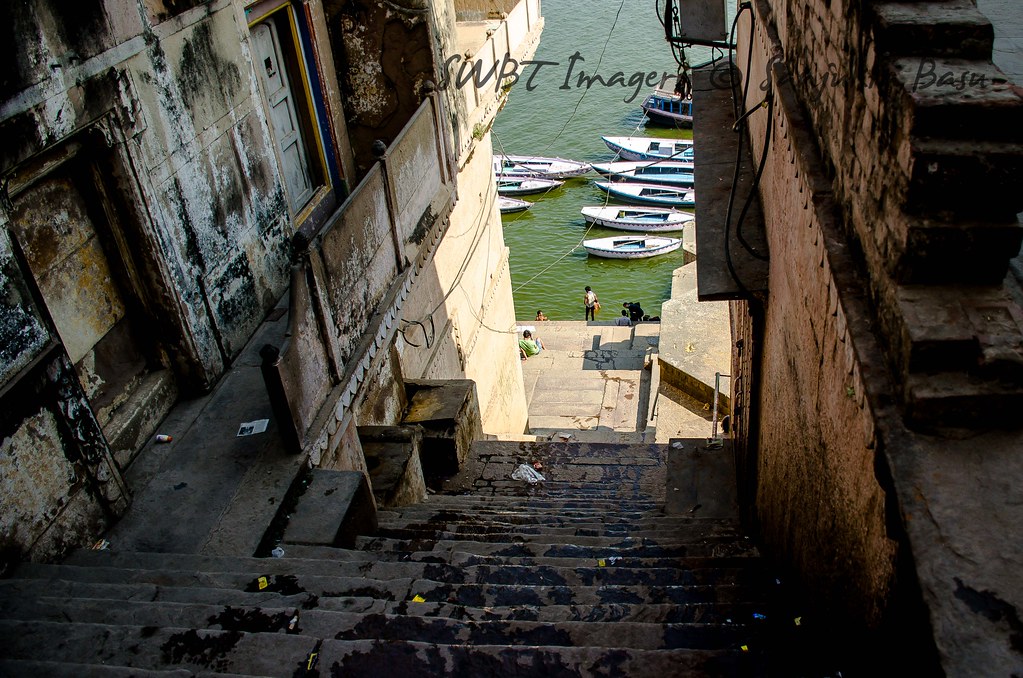 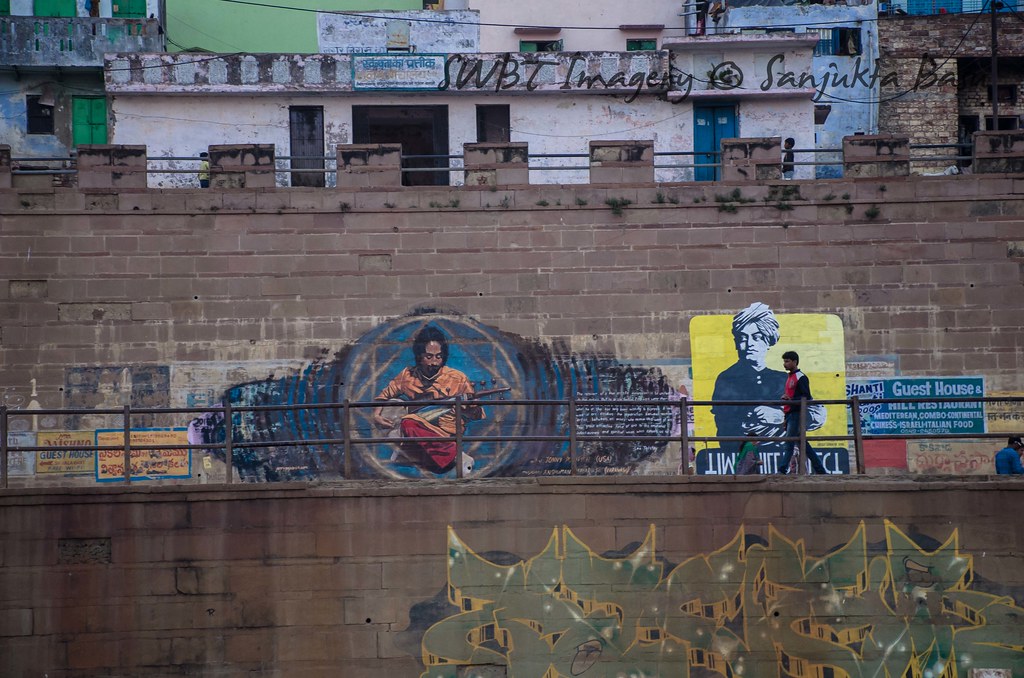 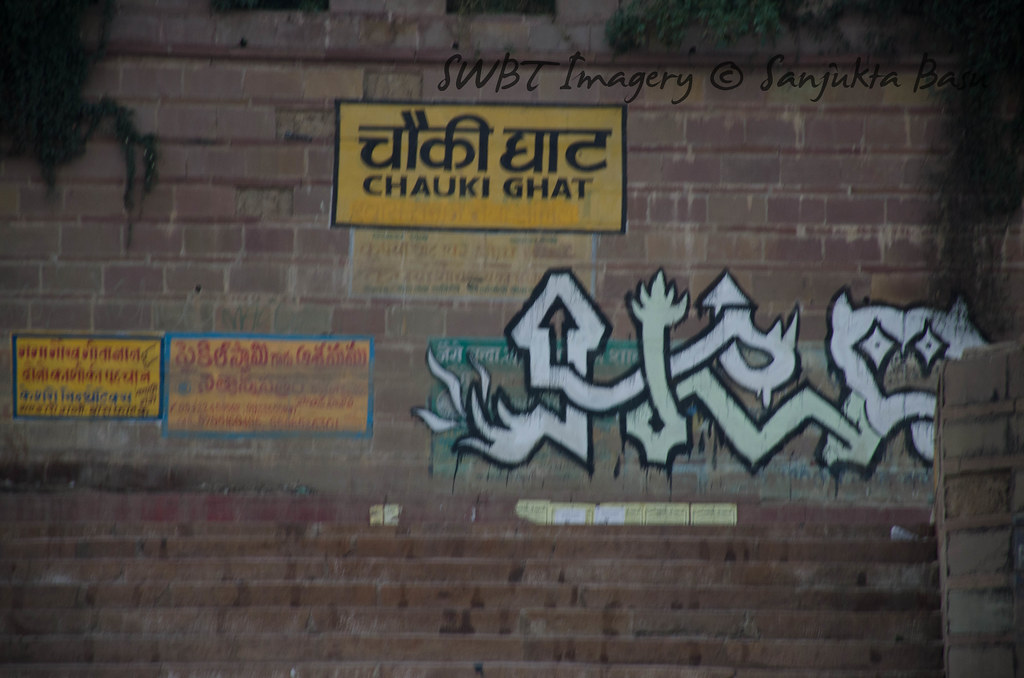 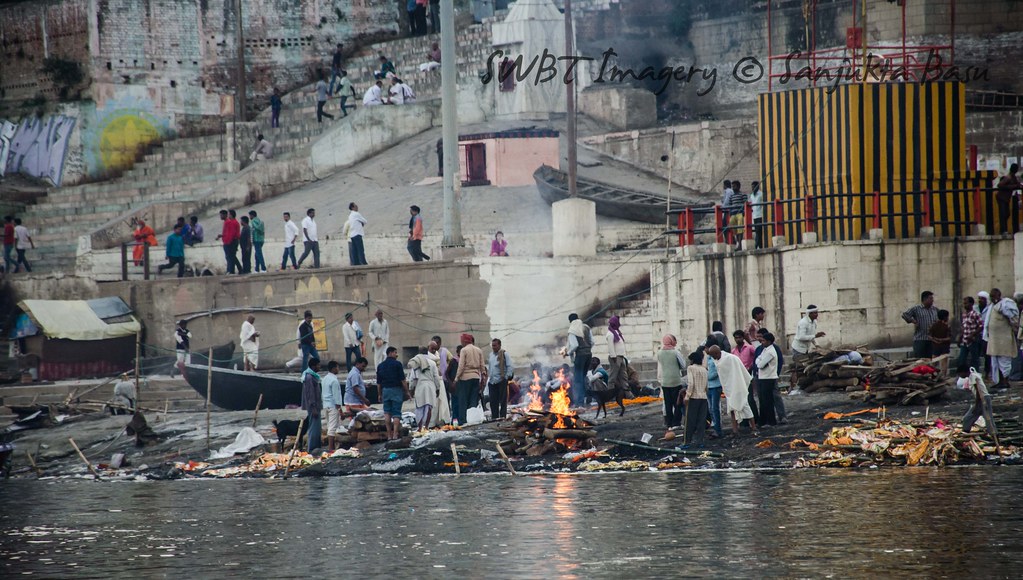 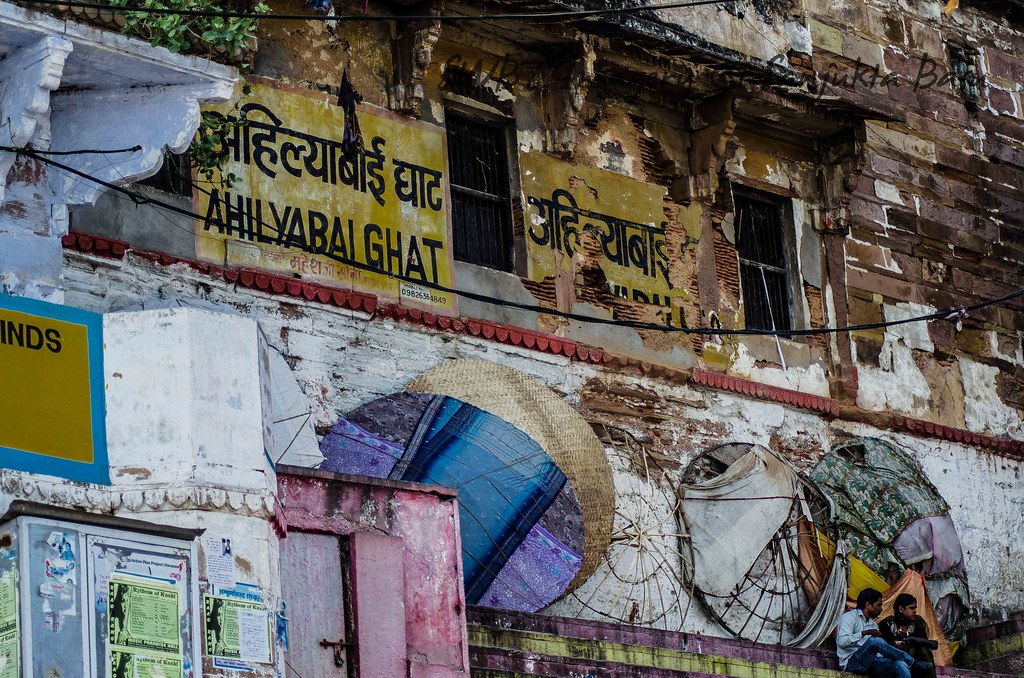 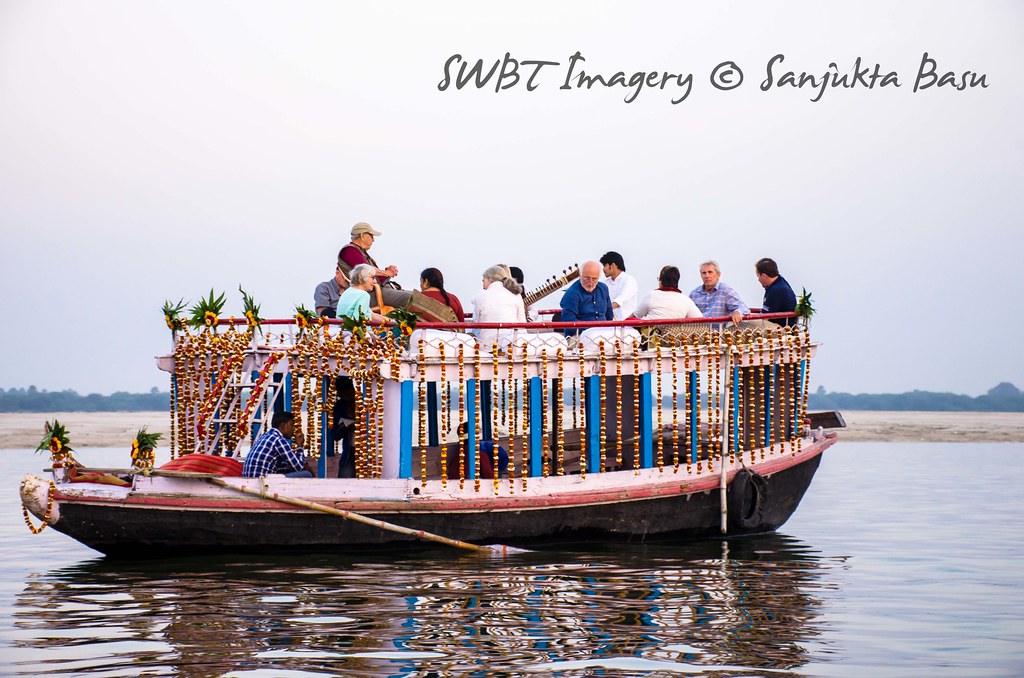 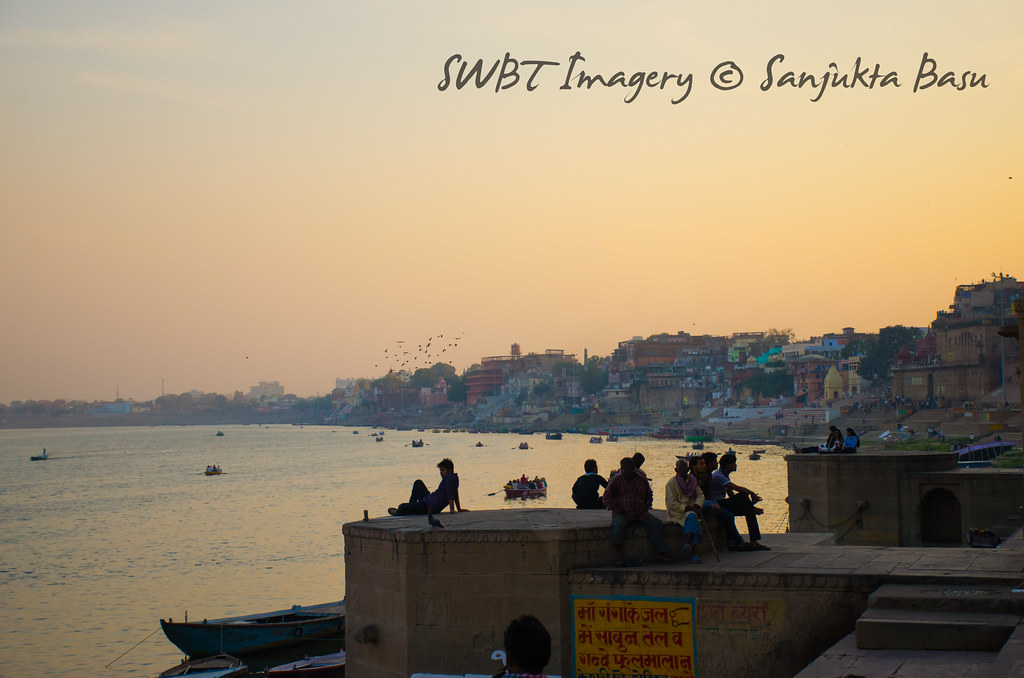 The Ganga Arti is a spectacular performance. For a minute there even an atheist like me was moved. But a silly Modi Bhakt ruined it for me by claiming that all this (the grandeur of the arti) is because of Modi. I rolled my eyes and asked, “But this Arti used to happen earlier also isn’t it?” He said, “Yes but now it’s more grand. Ab aur bhavya ho gaya hai” 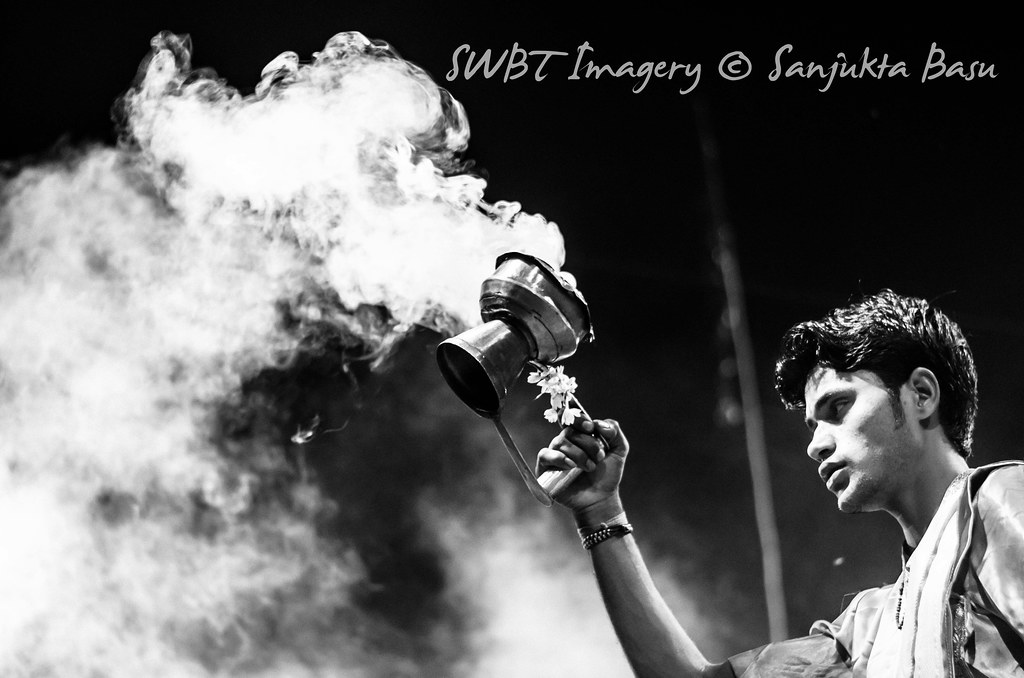 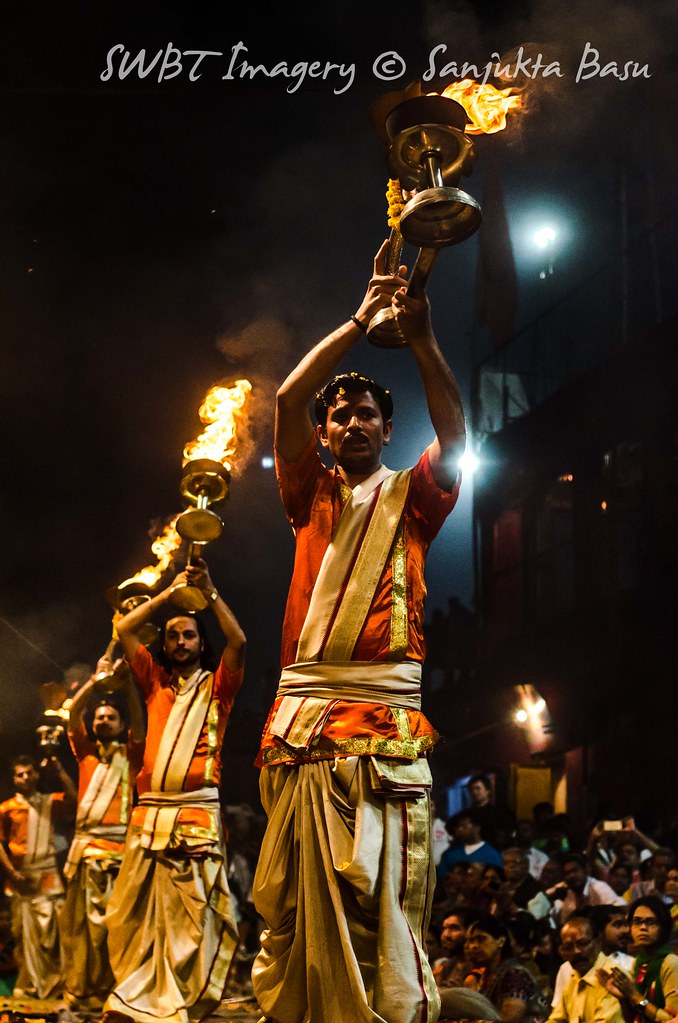 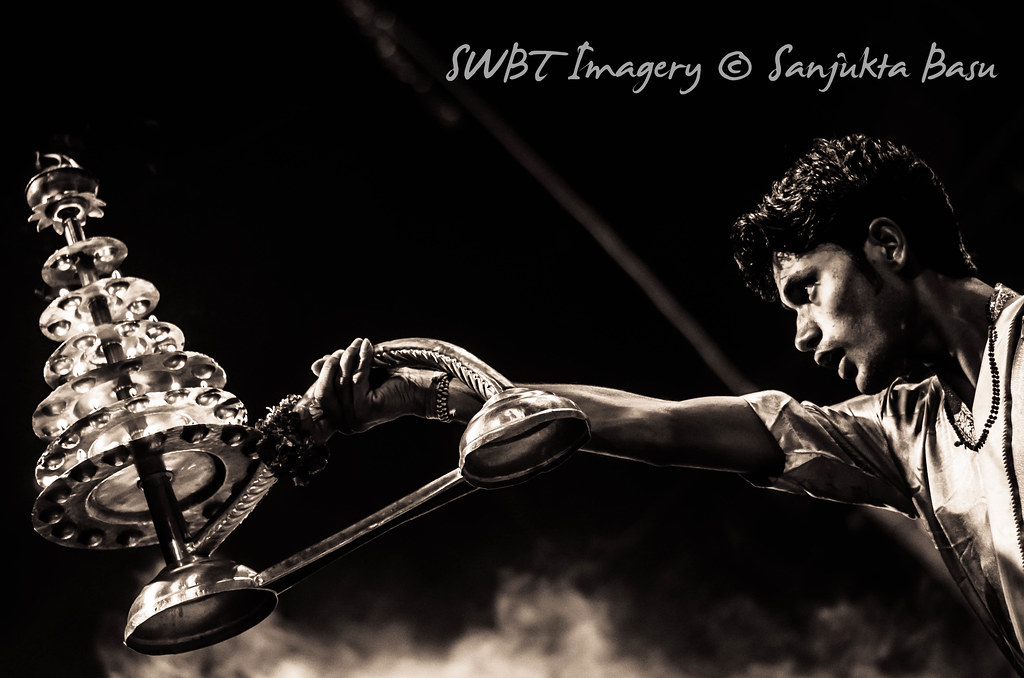 The Arti ended by 8 pm after which I headed towards Assi Ghat. An Outlook Traveller article on eating out in Varanasi had pointed me towards the ‘Pizzeria Vatika Café’ and a Zomato search also confirmed that this is one of the best place to eat in Banaras. True to its reputation the Café was full already with too many pizza lovers or those tired of Indian cuisine, and had a 30 mins waiting period.

But the wait was worth its while in terms of food and ambiance. It is an open air Café, with a little garden (vatika), situated right at Assi Ghat facing the Ganges. From my table I had the view of the Ganges and the moon peeping from behind the green leaves. They may not serve non-veg Pizza but have lovely crispy cheesy veg pizzas made right in front of you with interesting toppings like spinach, eggplant, along with the usual toppings like onion garlic mushroom or baby corn or pineapple and so on. The food was great already and a nice hour long conversation with Matt, a Canadian traveller was the cherry on top. I didn’t eat alone on my solo travel. My dinner couldn’t have been better.

As I walked out of the Café I noticed Assi Ghat was very deserted only a bunch of young boys chatting and laughing at a distance. A white man was sitting alone strumming a guitar. This was different from Dasaswamedh Ghat which is always full of people and consequently the lanes leading to the ghat are also awake till late in the night. Assi Ghat on the other hand was a bit secluded because it’s one of the last Ghats on the banks of Ganges and is not frequented by a lot of tourists. It is a hub for cultural activities though. I saw a lot of posters on the wall announcing musical concerts, theatre etc in Assi Ghat. I was alone at around 10 pm but felt safe. I bought a cigarette from a tiny paan bidi shop, there were 5-6 other men but nobody made me uncomfortable there was no weird look. I was absolutely happy and wanted to spend more time but was darn tired.

Back in my guest house I slept like a dead dog.